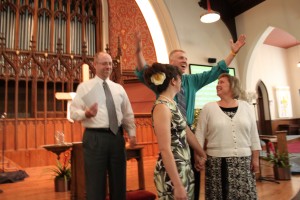 New beginnings. Isn’t that what the First Day of Spring is all about?

Since Skip-n-I moved back to our roots a little over a year ago, it’s been a world of discovering new beginnings. New relationships. New grandbaby. New adjustment to eight feet of snow. New home. New fave dining spots. New adult friendships with those whom we ate mud pies and stole kisses from on the merry-go-round.

Mine started last Monday at the ADK Chamber and you already know the whole mismatched boots story. What you don’t know is that my co-workers now call me “Boots”.

Skip’s will start on April 1st as the new Director of Music Ministries at Christ Church United Methodist in downtown Glens Falls. After a dozen some odd years in full-time ministry, we would have told you that part of our expedition was over. Well, that’s not entirely true. The truth is, every time we drove by the old Abbott’s Pharmacy building on Gansevoort Road in South Glens Falls, we had an itch to start a ministry where everyone was accepted. Where imperfect people like us could come to have honest dialogue about life. We’d call it “Abbott’s Pharmacy” – not just to save on signage – but with the idea that many life ‘prescriptions’ are being sought in earnest.

Then we turned right at Murder Mystery Mansion — aka: the Halloween party cleverly executed by two said mud-eating childhood friends Mark Petrie and Kenny Tubbs) — and through a series of connections, found such a ministry existed. And we wanted to be part of it. You see… the “killer” at the murder mystery was the chauffeur, expertly played by Phil Richards. Oh… and by the way, Phil is the pastor at Christ Church. Gotta love God’s sense of humor.

Along those lines, we’ve opted not to call Phil “murderer” (too difficult to explain at church picnics). Rather, we call him Father Philizzle. It’s fitting, and as you can see, he’s embraced it.

It’s Spring. Time to begin again. Hope you’ll come along for the adventure!

14 responses to “Butcha can’t take the pastor outta the boy: a world of discovering new beginnings”