6 truths to normalizing depression (part I of II) 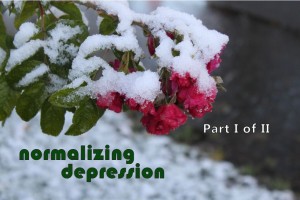 Now more than a year into my personal journey of depression, I continue to be amazed at the number of us who suffer with the illness and people’s perception of it. The latter often taking the larger toll.

Research tells us 54% of people believe depression is a personal weakness.

Taken from the actual comments of my readers, here’s why I believe that stat is so high:

One reader confessed, “I was the kind of person who equated depression with some sort of personal weakness (…before I’m the one who got depressed).”

How easy it is to pass judgment on a set of circumstances we’ve never been challenged with ourselves. Raise your hand if you’ve ever been guilty of a misperception [every hand shoots up in the air, my own included].

With culpability come the lines we draw in the sand. In a profound guest post, “What nature can teach us about lines in the sand“, Hubs shares his own journey of learning to recognize and appreciate the ebb and flow of life. Freedom was found once he allowed the tides to erase his rigorous lines, enabling him to see perspectives that would otherwise be obstructed.

In human defense, the lines we’ve drawn are part of our innate egocentricity. Not until self-absorbed turns to self-preservation do we pay real attention.

I admit I never gave much consideration to depression until it became the name of the sadness, exhaustion, and apathy which owned me. Never before had I found it so difficult to be me.

I first shared my battle with depression in one of my most vulnerable posts. The behind-the-scenes truth is this: the moment I hit “publish”, a slew of doubts flooded my mind questioning, “Should I have shared all of that!?”, “Will people look at me differently?”

Have I exposed a personal weakness??

I suspected I made a critical error. I even wondered if it would destroy my writing ambitions. All I remember thinking is, “I may never be fully happy or content again.” How utterly discouraging for one in an already seemingly helpless state. Knowing I wasn’t alone, I took the step of vulnerability in hopes of opening a dialogue.

And then… the comments began to pour in. Stories of so many others contending with the same demons. How had I not noticed them before? The beautiful swirling, silken scarf loosened around my throat. The deep breath I sucked in was a lifeline. A lifeline I vowed to share.

Look for the continuation of this post in Part II here…