Sexy﻿ phlegm: the plan to market my ‘sick voice’ 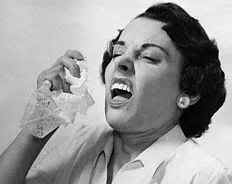 “…thirteen, fourteen, fifteen — that’s it!?”. That’s the response I get from my cheering section when I sneeze less than 20 times in a row. Aaahh, the life of a multiple sneezer. Said life this weekend was coupled with raspy breathing and a scorched throat. Cold #57 of the season, officially underway. “Good times”, as my son Grant noted with smart sarcasm. He has a knack for making me smile no matter my condition. He also has a knack for petting my forehead when I don’t feel well and that’s the best remedy on earth.

I remember staring down a similar flat-on-my-back kinda cold one Friday night at college. My friends, being so concerned for my well-being went downtown for a night of fun and frivolity (read: they did not pet my forehead and feel sorry for me). They returned to Kent Hall a tad – well let’s just say – unable to make any major life decisions. For some reason, Sick Donna ended up playing nursemaid at two o’clock in the morning to my giggly friends and all I kept hearing was, “wow, Donna… your voice sounds soooo sexy like that!”

Fast forward to 2010/2011, The Winter of Being Sick Every Other Week. After hearing my phlegmy voice during Cold #32, my friend Amy suggested, “You should sing Smelly Cat!” As Phoebe remarked to Monica after being told how good her voice sounds with a cold, “I know, I can’t believe how sexy I am!”

Lesson learned is that evidently I should be marketing my sexy phlegm voice. I’ll get on that as soon as I feel better.

One response to “Sexy﻿ phlegm: the plan to market my ‘sick voice’”