The broad brush of teamwork after the game 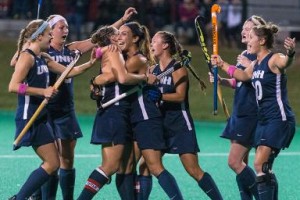 The crisp October day came with a mix of nervousness and excitement as we readied ourselves for battle. We had home field advantage in the Win-or-Go-Home high school field hockey game and our team was amped. What we didn’t know and could not have possible understood, was this was the last time we’d all laugh and share life together.

Outfitted with kilts, cleats, and an ambitious alliance, we clustered around Coach Marcantonio in a team huddle. Fusing our unique talents was nothing new. We knew we weren’t the most skilled unit on the field – but we were fast, resilient, and in it together. Coach Toad (as we affectionately called her) had baked into us a team mindset, which we not only owned, we relished.

Oblivious to the awkward, gangly teenagers others saw in the huddle that day, we were warriors standing 12-feet tall, fortified by fierce determination. The same fierce determination my teammate and best friend Denise would use only hours later to pull my clinging life from a car engulfed in 12-foot-high flames.

It didn’t matter that I was on the sidelines due to injury for that important sectionals game. The unspoken “I’ve got your back” assurance was rampant from bench to field to winning goal. Ours.

Forming a not-so-straight line after the game, we exchanged traditional hugs and high-fives with our worthy opponent for a game well played. Win or lose, this was always my favorite part of the game. Sportsmanship. Camaraderie.

Days later as I laid in traction in the intensive care unit of Glens Falls Hospital, grappling with the guilt of survival, I received an over-sized greeting card. Signed by every member of the opposing field hockey team, the card overflowed with hugs and high-fives of love, support, prayers, and encouragement. 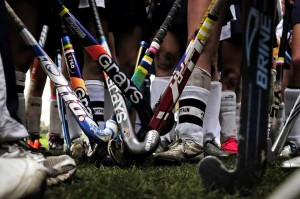 Through a blur of salty tears, I read every sentiment. Every name. Most of the girls I didn’t even know. Like Toad, their coach had instilled in them the very essence of competitive team sports and the critical broad view that follows the competition: friendship, camaraderie, compassion. They “got” it. And being on the receiving end helped heal my soul.

In many ways, I credit the broad brush of teamwork for the health of my survival these past 28 years. It’s about living life by embracing it with the same fierce determination we were taught playing field hockey.

The team memories I cherish most don’t come from our Win-Loss record. They come from the bonds we built and the memories we made together. The way Coach Toad braved an overnight with our entire field hockey team at her house, setting us loose in the neighborhood for a scavenger hunt. The goofy way we pretended half of us were deaf, the other half sign language translators when we stopped at a fast food restaurant after an away game. The many silly songs we went hoarse singing together on long bus rides. The hugs and the high-fives.

We challenged and pushed each other to achieve our highest potential, both as a team and as individuals. We cheered each other on in whatever way we could. Through stories and discussion, ache and adulation — and the freedom with which they were exchanged — our journey as a unified, team-minded front solidified lifelong friendships and built souls of love, courage, and freedom. How honored I am to have been smack-dab in the middle.