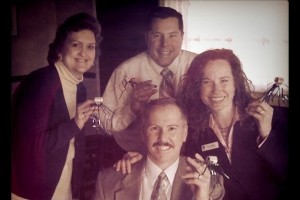 What a picture-perfect day for celebration… complete with blue skies, Adirondack sunshine and just enough Spring to leave your jacket behind.

So just what is there to celebrate?

Well for starters, today is our fearless leader’s birthday. Happy Birthday, Peter Aust! The Chamber staff surprised Peter with a scrumptious birthday lunch at The Black Watch in downtown Glens Falls (complete with party horns) and then politely declined dessert so we could indulge in the unbelievably good, homemade carrot cake Peter’s wife Noel sent in with him. I know what you’re thinking… that reminds me of when I used to send cupcakes to school with lil Jimmy to share with his class. Yeah… that’s right.

Peter and I also had the privilege to attend a press conference at Glens Falls Hospital where they unveiled their community campaign to create the Harry M. “Mac” DePan Surgical Care Unit. Hospital President and CEO Dave Kruczlnicki shared that Mac is on his very short list of heroes because on top of being a stellar surgeon, he cared for people at a profoundly deep level, with a smile, for 40 years. The new project, which already has half a million dollars pledged toward the two million dollar goal, will transform the 4W inpatient care area into a completely redesigned, patient-focused unit where people recovering from major surgery can recuperate with greater privacy and comfort. We also saw the premiere of the Hospital’s clever, hilarious, well-executed GFH “Makeover Show”, sure to rival any top reality TV show!

To top off the day’s celebrations, we applauded with pride the life-n-times of Ray Agnew as part of GFH and the Glens Falls region as a whole. After serving 13 years as VP for Community Relations at the Hospital, Ray is going back to his professional roots in academia as he joins the team at Paul Smith’s. It’s been an honor and privilege to have Ray as such an integral part of this community and, as Dave Kruczlnicki noted, he is wished all the best but will be sorely missed by many.