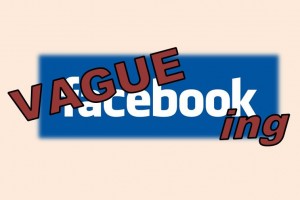 If you spend any time on Facebook, you know what vaguebooking is. It’s true you may be unfamiliar with the term, but you’ve more than likely witnessed it. The core concept lies in the writer’s ability to bait readers while remaining elusive. For me, it turned personal last month when a friend used vaguebooking to dilute the integrity of a mutual friend.

The Urban Dictionary defines Vaguebooking as an intentionally vague Facebook status update, that prompts friends to ask what’s going on, or is possibly a cry for help.

Rarely upbeat or positive, the baiting posts typically read something like:

The intentionally placed ellipsis (the three dots at the end of the thought) is often used to indicate something is missing, a thought is unfinished, or perhaps (and this one is most crafty), is a strategic move to inspire a feeling of melancholy.

Never a vaguebooker myself, I’ve seen my share and would like to expand the definition to include: elicits a pledge of loyalty from Facebook friends without sharing the story in full. In other words, desperately pleads with people to take sides — the writer’s — because afterall, the writer is “obviously right” (in quotes because no one ever wins an argument.)

A key component to vaguebooking is the ambiguity of who the writer is talking about. By excluding the person’s identity, the writer can claim intent of innocence. Posts like:

As I read the vaguebook post of a Facebook friend earlier this month, I instantly recognized the reference to our mutual friend (not by name of course — but later confirmed by the writer). It wasn’t complimentary. In fact, it intentionally called into question the mutual friend’s intentions for the very foundation of their friendship (ouch!) — but in a very poetic, hafta-feel-sorry-for-the-writer kind of way.

The post received a slew of ‘likes’ and comments — all which supported the writer without question. This is what befuddles me the most.

Why do people so quickly pledge undying loyalty to a vaguebooking friend when they don’t even know what or who is on the other side of the story? There are always two sides to a story, friends. Do not cast your vote until you’ve heard them both.

Lesson Learned: when responding with support to a vaguebooking friend, be aware you may be unintentionally slicing the Achilles of another.