The sting of betrayal 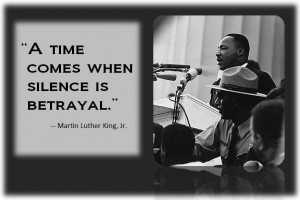 Speech delivered by Dr. Martin Luther King, Jr., on April 4, 1967, at a meeting of Clergy and Laity Concerned at Riverside Church in New York City.

I remember the first conversation I had with my baby sister about the sting of betrayal from someone she considered a solid, trusted friend. She was in her early twenties — as I was when I experienced the sting for the first time as a “non-kid”.

It hurts. A lot if you’re one of those who invests your full self into relationships.

We were states apart so the conversation took place over the phone. The depth of sadness in her voice reached into the bowels of my heart, breaking it in empathy. Ever the protective big sister, I wanted to shield her from the pain but alas, it had already set-up camp and so instead, we talked about Life Lessons.

On April 4, 1967, a year to the day before his assassination, Martin Luther King, Jr. delivered his first major speech on the war in Vietnam at a meeting of clergy and laity concerned at Riverside Church in New York City. As so many of the sentiments shared by MLK, the words, “A time comes when silence is betrayal,” may be applied not just to war but to the reality of everyday life. And friendships.

Friendships have a natural ebb and flow and to be successful, especially over a sustained period of time, must be watered and nurtured. Those relationships that cause you to second guess yourself — the ones that leave you feeling depleted, exhausted, and feeling worthless – are the ones that need to be discarded.

It’s time to stop watering your plastic plant relationships. Find the courage to walk away from damaging or stagnant relationships, no matter how good the ‘good times’ are.

Let me take it a step further…

In the 18th century, researchers discovered that soil itself is not essential to plant growth. When you introduce the required mineral nutrients into a plant’s water supply artificially, soil is no longer required for the plant to thrive (this is what we call hydroponics).

In your relationships, you will discover the purest ones don’t even require soil. Why can’t this apply to our 21st century relationships when we’ve known this about plants since the 18th century?

When a friend or family member betrays me with words or the lack thereof (the “silence” MLK spoke of), it pains me. The “silence” screams at me as friends do nothing and say nothing in the abrupt face of untruth and injustice. With their silence, they watch me metaphorically drown.

Well, I’m here to tell you… when someone gets kicked enough times, it eventually makes even the strongest break down and cry. The question becomes… now what?

As my husband Skip-n-I pondered this very question last night, he (in his usual wise and attractive fashion) shared a difficult but very freeing truth with me, “You can’t let them off the hook.” He continued, “You can determine the path of your friendship from there, but you can’t pretend it didn’t happen simply because you’ve made some good memories together.”

At first glance it may appear harsh and/or punitive but the truth is, if you simply allow everything to be status quo, you’re not being true to your self.

You’ve been wounded, betrayed, used. How can you pretend you haven’t? This is an area where I dare say many of us cover up our real feelings in attempt to somehow make peace by pretending everything is okay.

But if you choose this route (and friends, it is a choice), aren’t you now betraying yourself? …so soon after you’ve been betrayed by others?

“A time comes when silence is betrayal.” If your friends can’t stand up for you when you need them most, all those ‘good times’ are really moot, aren’t they?

Invest in the relationships that help you grow and flourish — in good times AND difficult ones.

[added by Donna Smaldone June 24, 2012]: I believe this is the first time I’ve appended a post, but when I came across this quote I said aloud to my husband, “This precisely sums up what I was trying to say in the “betrayal” post…”

“Silence in the face of evil is itself evil: God will not hold us guiltless. Not to speak is to speak. Not to act is to act.”  ― Dietrich Bonhoeffer, German Lutheran pastor and theologian (1906-1945)

6 responses to “The sting of betrayal”