The culture of war: a personal nightmare 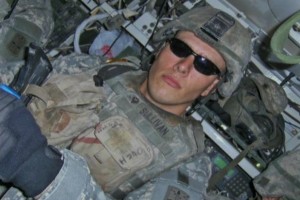 Today’s guest post comes to us from 26-year-old tattoo artist Corbie Sullivan. In addition to his tattoo art, Corbie currently works with mentally handicapped adults in upstate New York. But not so long ago, Corbie served in the Army Infantry for three-and-a-half years, spending 16 months in war-torn Mosul and Baghdad. “I joined the Army because every time I watched a non-fictional war movie or documentary about 9-11, I knew I wanted to contribute and do my part,” he tells me. He tells more — much more — in the up-close-and-personal essay he wrote several years ago. The essay, “The Culture of War Brings Jumble of Emotions” was published in The Post Star on Memorial Day 2009 and re-printed here with Corbie’s permission.

Can you imagine having so much hate for someone that the very thought of him is enough to make your blood flow through your veins like molten lava. Hating someone so much that thought of their death doesn’t bother you the way you know it should? This war has been fueled by hate; one culture hated another so much that it would stop at nothing to take the lives of those they hated. War is a culture that can make even the nicest people feel and experience hate.

War is a culture filled with emotions of all kinds. Everyone deals with and reacts differently to the highs and lows of war, and the emotions that come with it. War is one, if not the only, thing that can make your emotions and senses get so out of whack that you stand like a statue, cemented firmly in place, as you watch a tracer round burn through the sky, flying at 1,500-feet-per-second as it works its way straight towards your face. Barely moving as you feel the bullet fly right by your face and crack to the ground behind you, before you finally snap back to life.

War is one of the only things that can make you feel several contradictory emotions at the same time. Imagine you are on an everyday patrol; the sky is blue, the sun is shining bright, not much is going on. You start to get a little complacent. You are joking around with the other people in your vehicle, maybe even playing practical jokes on each other. You kneel down from the hatch that you are in onto the seat below, and ask someone sitting inside the vehicle to hand you a bottle of ice cold water from the cooler on the floor. As you reach to grab the water from him you hear the crackling of the radio in your headset.

“Buffalo One; this is Buffalo Main, over.”

“Buffalo Main, Buffalo One, go ahead.”

Buffalo One, Roger, we need you to go to the bridge on route Raven, two civil contractor vehicles hit by an I.E.D. (Improvised Explosive Device), two K.I.A. over.”

“Buffalo Main, Buffalo One, Roger that, over.”

You start to smell burnt flesh; a few more steps you see two men pulling a lifeless body from one vehicle while two more go in for another one. A few more steps, a little slower as the smell of death and flesh is almost unbearable now. You look down as you pass the bodies of fellow Americans, their bodies burned and flesh torn from their bodies exposing parts of the human body not meant to be seen.

You find yourself unable to look away from the nightmare that won’t end. Then, out of nowhere, you hear a painful scream. You look quickly to your left and see two men on the ground alive but with limbs barely attached. You look across the street to see four Iraqi men sitting on a balcony overlooking the bridge watching your every move. After putting the dead into body bags, loading their bodies into a vehicle and getting the wounded onto a helicopter, you mount back up and start to drive away, looking back at the totaled vehicles left behind.

Several emotions hit you all at once. Is it hate, love, maybe it’s sadness or even a feeling of glee? Or do you feel nothing at all? The answer is all of them.

You feel hate toward your enemy, at times even the entire culture of your enemy. You feel love for the men to your left and right, despite your differences or level of friendship. You look around and know that you would die for any of them, and that they would do the same for you no matter what.

You feel sadness for the American wounded, dead and their families whom you have never met.

You feel glad that it wasn’t you, and then a little bit of resentment towards yourself for feeling that way.

After a while you become numb to it all and feel nothing at all.

War is a culture filled with emotions of all kinds; and is capable of making you feel all of them. Hate, fear, sadness, love, happiness, or anyone of the many other emotions humans are capable of feeling. War is truly hell on earth, making you experience things you never thought you would outside of a dream or a movie. This is war and a culture all its own.

8 responses to “The culture of war: a personal nightmare”