How would YOU see the world without sight? 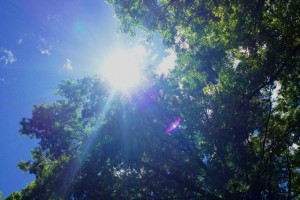 How does one describe the sun’s brilliant tentacles as they pierce the foliage of a robust tree? Can the full measure of an astounding sunset or the feigned look of innocence on a mischievous toddler’s face be adequately depicted using only sounds?

I believe the answer is, “yes” — particularly when the translation comes from someone who really knows you.

Imagine how much more powerful and relevant those words would become if accompanied by music.

Are not pictures painted through emotion? And isn’t raw, authentic emotion most easily expressed through music? Consider how many times you’ve closed your eyes listening to a song.

My friend Pam Fisher has degenerative hearing impairment and tested a mere 20% for speech recognition. In early April, she made the brave choice to speak out and began writing here. She embarked on her quest for clarity only after she was able to admit it was, “excruciatingly difficult to understand the world around me.”

Haven’t each of us found ourselves battling to understand the world around us at one level or another? I applaud Pam’s courage and her unapologetic drive to live life more fully.

With only nine days before her cochlear implant surgery, my nearly-deaf friend writes, “I fear how I will make sense of music.”

This may strike you as odd at first because you’re probably thinking about how much more clearly she’ll be able to hear the music. But you see, it isn’t simply about sound or noise. It’s about emotion and how the music makes her feel.

Pam understands that whether or not her cochlear implant succeeds or fails, she will never lose the songs already in her heart. They are there forever — only in part because of the “noise” they make — but more fully because of the deep, personal meaning they have to her. No drilling sound can take that away from her. Ever.

Expressions of love and life are woven together, like strands of yarn intertwined to create a majestic tapestry; each color shining in its own right, but made beautiful in their union. With or without sight or hearing, those expressions are most authentic when translated by someone who loves you.

Who would translate the world for you? And how?