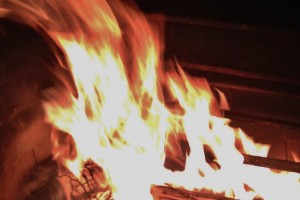 Our blazing campfire at Rogers Rock in Lake George, New York — courtesy of my iPhone (July 10, 2012)

When you walk around with a shocking burn scar on your leg, people wonder how you got it. When you explain you were trapped in a burning car and your leg was on fire, people wonder what it felt like. This is human curiosity.

People say things to me like, “I once burned myself touching the oven rack {or curling iron; or while ironing my pants} — and that was only for half a second! But it hurt so badly, I can’t even begin to imagine . . . ” and then their voice trails off, unable to articulate a horror they can’t fathom.

Following the tourist rush of the July Fourth holiday, my BFF Denise Foster scored a beautiful lakefront campsite at Rogers Rock — and for four perfectly splendid Adirondack days, the two of us breathed nothing but fresh mountain air. We kayaked. We hiked. We soaked in the sun.

We slumbered to the songs of the loons. It was glorious.

Our evening routine consisted of driving offsite for dinner (read: attempting to look like civilized people who had not been sleeping in a tent!) And building a campfire better than the night before.

On our final night, I volunteered to start the fire while Denise sat atop the lifeguard chair, practicing for an upcoming show. The mute in her trumpet sounded like the buzz of a video game and I smirked, wondering if other campers thought they were listening to fireflies sing. 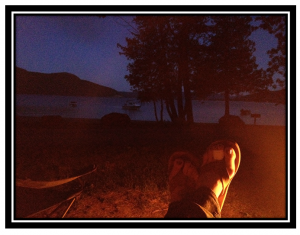 Sitting by the fire, watching the night envelope Lake George. [Yessir… those are my feet (and my poor lil bandaged toes).]

Cozily anchored beside the warmth of the flames, I began capturing images with my iPhone. Gazing into the depths of the majestic, hypnotic flames, I became acutely aware of the strength held by the fiery fingers, each using the others to climb higher. Were they working in unison or were they in direct competition? I couldn’t tell.

For the first time ever, I likened my leg to the logs — and really thought about it.

Just 25 years ago, that had been me… immersed in flames.

The pain was excruciating. Unbearable. Incomprehensible.

But more than the physical torture was the emotional agony. In that moment, I was certain I was going to die.

I looked with envy at the logs which had nothing to lose. Nothing to sacrifice. No loved ones to whom to say good-bye. On the contrary, they were fulfilling their destiny. Like a puppy adopted from rescue, this stack of wood was purposed for this night — this very fireplace. They belted out crackles and pops like a victory chant with no rhythm.

Had I, too been “destined” that fateful day 25 years ago? Was that my purpose?

The accident 25 years ago? Was a sign I am here on earth.

My very noticeable burn scar? Well, as my baby sister says, “That simply means you were stronger than whatever tried to hurt you.”

4 responses to “What it feels like to be on fire”