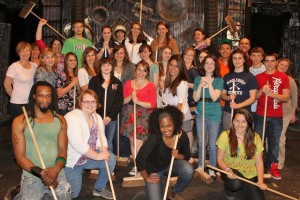 Members of the Warrensburg High School Band and chaperones (including me — but I’m behind the camera!) on the set of “Stomp” in NYC (April 20, 2012)

“When we get back on the bus, you need to come sit and talk with us,” implored Tyler, one of the two dozen high school band students on the New York City excursion.

How stimulating it was to help chaperone my childhood BFF’s students on this overnight trip. It just so happens their band teacher is my real, live heroine and I felt full of bragging rights. The more I watched the connectivity between Denise and her students, the more inclined I became to share the traumatic experience that forever altered our lives.

I spent the 45-minutes we had at the rest stop contemplating exactly how much I would tell them. Should I share everything? Where would I start? What do I want to leave them with? We’d just artistically squeezed both “Stomp” and “Spiderman” into a 24-hour period so we already shared a ‘high-five’ sense of accomplishment and bonding (more here from fellow chaperone and new friend Steve Danna).

Tyler, one of the five boys on the trip knew his band teacher had saved someone’s life — and earlier that day she told him it was me. He had an inkling of the lugubrious nature of the tale. But was he the only one?

Gathering in the back of the bus with excited anticipation, the students needled me to start the story. “It’s about Mrs. Foster, right?”

I assured them it was, but cautioned it was a somber tale.

With 23 pair of young eyes locked into mine, I began recounting the day, disclosing I remember everything except the actual crash.

Relating such an intensely personal story with a group of teenagers is potent. Especially when those teenagers have such an affinity for my heroic friend. I inhaled deeply before I told them we lost two of our most precious friends that day. I had to, or I would’ve cried. Not that I’m against showing raw emotion — I just wanted to make it through the rest of the story without becoming a blabbering chaperone.

Sometimes when I relate the events of that fateful day it’s like I’m reciting from a book. But sometimes I relive it with each word I share. This time it was the latter.

I could see empathy in their fresh, adolescent eyes. I could feel them feeling anguish with me.

“She’s a real, live heroine,” I told them of their own Mrs. Foster. “She put her 16-year-old life at risk in order to give me more of mine.”

With provocation, the students erupted into proud applause. And I beamed.

It turns out I didn’t need to think through what I would leave them with. They discovered it all on their own — and in ways I could never have conceived.